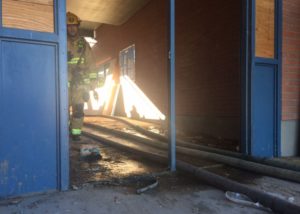 The Tucson Fire Department is training at the former Van Horne Elementary School before it is torn down. (Source: KOLD News 13)

TUCSON, AZ (Tucson News Now) – Firefighters in Tucson are heading back to school.

Crews from around the city are using an old schoolhouse on Tucson’s east side to practice for huge commercial fires.

Pepper Viner Homes in Tucson acquired the vacant Van Horne Elementary School and is allowing the fire department to train there before the building near Speedway and Pantano is torn down.

Firefighters from seasoned veterans like Ed Mendoza, who has been with the Tucson Fire Department for more than 20 years, to rookies like his son Ed Jr., who has only had four days on the job, say the training is priceless. 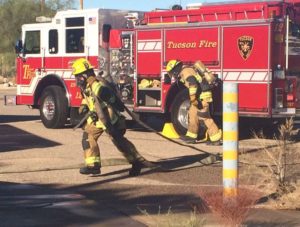 Firefighters get this kind of training only a handful of times a year. (Source: KOLD News 13)

“We’re always looking for new techniques,” Tucson Fire Department Capt. Andy Skaggs said. “We want to be on top of our game. We want to make sure that we are doing the best of the best.”

Crews are practicing how to best get inside, what to do once they’re in there and how to get out safely.

This is a technique that creates a chimney to facilitate ventilation for anyone trapped inside during a fire.

Firefighters get this kind of training only a handful of times a year.

Andrew Thoman, a firefighter who has been with the department less than a year, said this is a chance to make mistakes so it doesn’t happen on a real fire.

#Tucson firefighters are getting a unique chance to train on an old school bldg. Materials they normally don’t get! pic.twitter.com/o9MGaBQHq4

“This just gives us the ability to run that drill over and over again so when we go in and it’s in the middle of the night, two in the morning, it’s like clockwork,” Thoman said.

Since there is only a three-day window for training at the building, not all firefighters will get a chance to drill this time. But the fire department is always looking for these opportunities so they can learn from them and be better for when they get a call from you.

By admin|December 28th, 2016|News|Comments Off on Tucson firefighters get new lessons in old school building