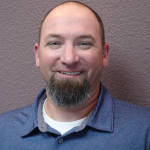 Pepper Viner Homes has named Joe Russell the General Project Manager, overseeing the construction at all of their new home communities, according to Bill Viner, CEO.  “Joe brings us superior building acumen and knowledge,” Viner said.

A Tucson native, Russell is following in his family’s footsteps.  The family has been building homes in Tucson since 1948 and Russell worked in the company learning every aspect of home building.  He worked as a crew foreman in metal framing for six years before joining Pepper Viner.  He started with Pepper Viner in 2004 as an assistant Project Manager and earned a promotion to Project Manager within his first three months with the company.

“When Pepper Viner finds an individual like Joe who has exceptional building and interpersonal skills, we want to promote them and keep them as part of our team,” said Bill Viner, CEO.  “We are very proud that Joe has taken this role in our company as we position ourselves for future growth.”